Parts 2 & 3 have been fairly close together, but lots has happened over the last day!

When I got home from work last night, I spent lots of quality time with Morgana. After all, it was Black Cat Appreciation Day, and I had to let her know that she’s still my best girl. While it was just her and me in my room, I gave her some of her favorite wet food (Halo’s Spot’s Stew is fantastic, for anyone looking for a holistic wet food that is grain-free! It’s full of protein and fiber that cats young and old need. Our 17 year old cat loves it, Morgana loves it, and so does Remus! [I gave him a bit this morning.]), and just talked to her while she was sniffing around the room, investigating the lingering scent of Remus from the night before. After about 30 minutes had passed, her yowls and hisses were replaced with my purring, chirruping, sassy girl. Even after I went into Remus’s room to feed him and play with him a bit, she didn’t react to his scent on me (unless you count a glare and a cold shoulder for about 5 minutes, but no hisses or yowling!).

The rest of our night was uneventful, with Morgana alternating between my bed and her climbing tree. Remus slept through the night without waking up and crying, finally rid of those pesky fleas we found yesterday! I’ll have to admit, I woke up around 3 in a panic. “I CAN’T HERE HIM. HE’S DEAD. OH HE’S EITHER ASLEEP OR HE’S DEAD.” However, he woke up bright eyed and bushy tailed (seriously. so bushy. so fluffy) around 6:30 this morning when he heard Morgana and me up wandering around.

Morgana’s reactions have lessened around Remus! She wandered over to his room, sniffing the door frame as he mewed and stuck his paws under the door. Although, she wasn’t happy when I shut her in the bathroom with me as I was getting ready. He seemed significantly louder in there, so she couldn’t ignore him. However, she yowled once or twice, but otherwise seemed unfazed, if a bit curious about the noise.

Once I finished getting ready, I went in to Remus’s room to play with him a bit, comb him for fleas, and put the oil on him again.

Side note:
When we discovered fleas on Remus yesterday, sister and my mom went out and got lemongrass oil and eucalyptus oil that they mixed into a spray. We’re putting it on Remus 2-3 times a day. While it doesn’t kill the fleas on him, it acts as a repellent. He’s already a lot more comfortable, and this morning, when I combed him again, I got a few dead ones. Since he’s a kitten, I’m never comfortable putting the flea/tick drops on him. When a $50+ product says that it’s harmful to animals if ingested, and you’re putting it ON an animal…no thanks. (Also, my sister and I get skin reactions to them, so another strike against it.)

When I had to leave the room to grab a broom & litter scoop, I left the door open and carried him with me. Surprisingly, Morgana wasn’t too angry with this. Instead of yowling or hissing, she just glared from the top of the stairs for a while, before approaching the room cautiously and sniffing around, even though Remus was scampering about.

When I was finished in his room, I gave him a bit of the wet food left over in the tin from Morgana’s breakfast, and  shut the door. THAT bit, he didn’t like. The little dude is way too curious. HOWEVER, when I scooped up Morgana a few minutes later to walk downstairs and get coffee (for me) and breakfast (for her), she purred and headbutted my chin like she normally does, even though I probably REEKED of Remus!

Later this morning, while I’m at work, my sister sends me text updates of the shenanigans at home. She’d brought down Remus into the kitchen, and Morgana, having claimed the kitchen as her favorite hang out spot, stayed and sniffed around, observing him from a few feet away! Both my sister and my mom were there, so this was extremely supervised, but knowing that they’ve made this much progress in this short of a time period is exciting! For now, we’re keeping these visits under an hour, and will continue the pattern for about a week, just to be safe.

This evening, both cats will get extra attention AND meet their dad! SUCH an exciting day!!! 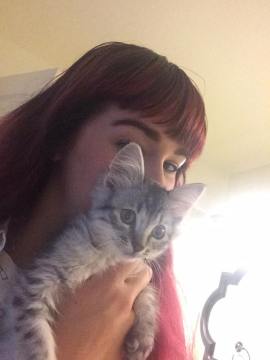 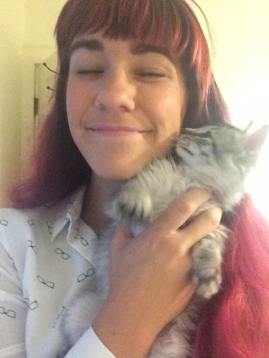 curiosity in the kitchen
2016-08-17 rebellibrarianess2 Comments

According to an article by the Animal Humane Society,

“The typical adult household cat will accept a new kitten much more easily than he will accept a new adult cat. Cats are by nature very territorial, and your cat may resent an adult feline intruder, attacking him or retreating under the bed as a result. He may, however, feel less threatened by a relatively helpless 8 week old kitten. Even so, you will want to monitor your cat’s behavior with the newcomer until you’re sure he will not harm the kitten. Follow the introduction protocol below for maximum success.”

Of course, I read this only AFTER introducing Remus Mewpin (Egyptian Mau mix- 2 months- grey) to my household, already occupied by Sissy- dog- 14, JoAnne- cat- 18 (or 16. Idk she’s old and hates everyone ), and Morgana-black cat- 1 yr & some months. 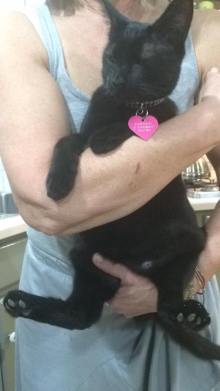 But I digress.
Let’s go back to how I came to bring Remus home.

Early last week, a friend mentioned that her neighbors had a litter of kittens they wanted to adopt out. Having consumed a couple of wines (or beer), I became putty, helpless against the charm that comes with four tiny legs, whiskers, and a tail. After texting my boyfriend (since a new addition would mean a grand total of 4 cats when I move in) and talking with my mom (since it would live with me in our house for a few months til I move), I confirmed the adoption. They say that the waiting game is the hardest. I’ll just confirm that right now. However, then the day came: yesterday, actually, when I could go pick up baby cat and bring him home. (except at the time, I thought he was a girl, so I was all ready to name her Rowena…SURPRISE.)

Once I brought him into the house, his curiosity was piqued. Unfortunately, so was Morgana’s. While she wasn’t aggressive or angry, she’d glare from afar and skulk around, hissing and yowling softly whenever he mewed (which honestly, was a lot. So tiny, so loud…). Since I wasn’t sure of his attitude around people or other cats, I set up temporary housing for baby Remus’ first night. A cat carrier, left from the early days of my childhood, when we had cats that outweighed most small dogs, was outfitted with a fluffy blanket, food, and water, then kept on the floor in my room. The blanket that was used to transport Remus home was set out in the middle of the floor for Morgana to investigate (see step 2 below), although she was more interested in the carrier & Remus himself.

The night was (happily) uneventful, with Remus sleeping away, occasionally waking up and mewing softly a couple of times, then falling back asleep. Morgana, wary of this invader, spent the night skulking around, making unhappy noises. After reading this great article from Modern Cat, I learned that her sounds weren’t out of the ordinary, and didn’t mean the introduction was headed down a bad path. Her hisses were soft and dry: there wasn’t any spitting, and she never bared her fangs, arched her back, or puffed up. She was also making a low, rumbling humming sound, which, turns out, is called a “yowl.” This is much better than a growl for a few reasons:

This morning was a bit tense (on me). Morgana yowled softly, glaring at me, and ran downstairs when I opened my door, taking a piece of my heart in her tiny paws. I took Remus out of the carrier and changed the blanket (he’d spilled part of his water all over it. Whoops. baby.), gave him fresh food & water, and followed Morgana down the stairs. After making coffee, I tried to lure her back into loving me, but to no avail. Glaring at me, she hissed and walked away, leaving me to collapse in the middle of the floor like I’d been shot. “PLEASE LOVE ME AGAIN.” My mother, coming upon this scene, me sprawled in the middle of the floor, Morgana shunning me in the other room, lovingly observes “You’re pathetic. She hates you. It’s all your fault.” Thanks mom!

Of course, she’s actually fallen in love with the grey ball of fluff, and I have a feeling that it will be a struggle to get her to part with Remus when I move in a few months.

This is where the step by step begins. While researching (I’ll post the links I found the most helpful below the article), I found that there are several stages of integrating a cat into a household with already established pets. From the cats’ perspective, the newcomer has just been dropped behind enemy lines, while the other cat sees an invader on his/her territory. The most important thing is to go by the pace of the most stressed-out cat. That would be Morgana, in this case.

I’ll be posting occasionally under the ‘Tail of Two Kitties’ series about how Remus & Morgana are doing, and letting you know how each of the steps are, or are not, working! For now, I’m just getting constant text updates from my sister on the attitude of my cats. Lol (For those curious, Morgana is cranky, but less spooked and more curious. Remus is still happily oblivious, eating and napping the day away.)

Here are some of the great resources I found while I was doing my research. Each of them vary slightly, because of course, each cat is different, so some might not need as many steps as others.

“How to Introduce a New Cat to an Old Cat.” Animal Planet.
http://www.animalplanet.com/pets/how-to-introduce-a-new-cat-to-an-old-cat/

“Introducing Your New Cat To Other Pets.” Humane Society.
http://www.humanesociety.org/animals/cats/tips/introducing_new_cat.html